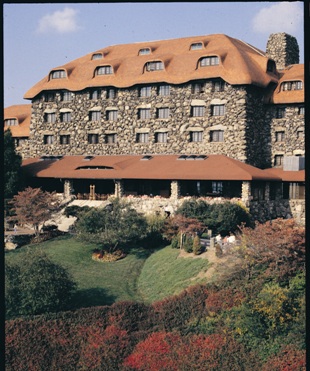 The Grove Park Inn Resort & Spa is one of the South’s best-loved resorts. Built in 1913 with granite stones mined from Sunset Mountain, the resort overlooks the city of Asheville, N.C., and provides majestic views of the Blue Ridge Mountains. With its distinctive undulating red clay tile roof and original Roycroft furnishings and fixtures, The Grove Park Inn captures the essence of the Arts and Crafts movement.  Throughout its massive lobby, words of inspiration from noted authors and anonymous sources are etched in stone.

The pure mountain air, impeccable service and unparalleled cuisine have attracted visitors by the score, from William Jennings Bryan, who delivered the keynote address at the inn’s opening in 1913, to Thomas Edison, Will Rogers, Henry Ford, F. Scott Fitzgerald and eight U.S. Presidents.  At the end of the 20th century, The Grove Park Inn underwent a major renovation, adding a 40,000-square foot spa and expanding its outstanding sports complex.

It was during the 1880s that Edwin W. Grove, owner and founder of Grove’s Pharmacy and Paris Medicine Company of St. Louis, Mo., began spending his summers in Asheville.   A frequent sufferer of bronchitis, Grove’s doctor had advised that the mountain climate might prove soothing and beneficial. He came to love the area after spending more and more of his time in Asheville and became quite involved in the growth and development of the small city.

Grove dreamed of building a resort hotel as early as 1909, but it wasn’t until 1912 that his dream began to take shape.  Workers from all over the South converged on a grassy mountain slope overlooking the city and the construction of The Grove Park Inn was under way.  Hundreds of mules, wagons, pulleys and ropes were used to move the massive granite stones, some weighing as much as 10,000 pounds, into place.

Since that time, thousands of visitors have passed through the resort’s majestic lobby, drawing inspiration from the numerous quotes by authors, famous and unknown, that adorn its distinctive stone architecture.