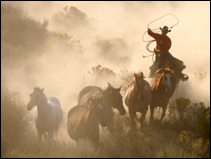 VISIT THE AMERICAN WEST IN A MOTORCOACH

Nothing epitomizes the West as much as the Grand Canyon. Want a deep and meaningful experience with this 277-mile-long chasm? Cinch your life jacket and hold on tight - with both hands - while shooting the rapids of the Colorado River.

One-armed Civil War veteran John Wesley Powell first explored the uncharted canyon of the Colorado in 1869, well before the art of whitewater rowing had been born. In Powell's keeled cutwater boats, two men rowed hard downstream while another man in the back attempted to steer with a long sweep oar. It was hardly a pleasure trip, much less safe. Fast forward to 1938 and the first commercial Grand Canyon river trip.

These days, intrepid travelers boat the canyon in relative luxury. They have choices: red or white wine with fresh trout or filet mignon? Oars-powered or motorized craft? Inflatable raft or dory?

Inflatable rafts bounce off rocks and hold lots of gear. On a big motorized raft, 20 people or more can make it through the canyon in a week. They are wild fun, but aren't the only ride in town.

Oars-powered dory boat trips provide an interesting alternative. Dories are small, rigid boats designed to carry four people plus gear. At almost 17 feet from stern to bow, dories have passenger benches with backrests and hardwood rails and trim. Although a dory can run a river faster than a raft, dory trips are not about speed, but about an experience that's intimate and, some might say, "organic." O.A.R.S., the first oar-powered outfitter to run the Colorado through the Grand Canyon in 1969, is a legendary fixture in Western river running.

Hightail It on Historic Route 66

The migrants who went west, especially during the Dust Bowl of the 1930s, chose a path often referred to as the Main Street of America, the Mother Road or the Will Rogers Highway: the famed Route 66.

Established on Nov. 11, 1926, the highway originally ran for a total of 2,448 miles. It headed west from Chicago, through the rest of Illinois, Missouri, Kansas, Oklahoma, Texas, New Mexico, Arizona and California, to Los Angeles.

In 1985, the route was declared "no longer relevant," having been replaced by the Interstate Highway System.

Relevance is a relative thing, however. What's "relevant" has a way of changing, especially depending on one's mode of transport. On a motorcycle - a hog, to be specific - Route 66 can be wildly relevant.

Harley-Davidson offers Route 66 tours, both for individuals (self-guided) and groups. Day 8 of the guided, two-week, 2,277-mile tour, for instance, takes riders deep into the Wild West; this 130-mile stint ends in Cody, Wyo., (named for William "Buffalo Bill" Cody, of course) and features a nighttime rodeo (on horses, not hogs).

Despite hardships, Meriwether Lewis wrote this of the two-year westward expedition that he led with William Clark: "It seemed as if those [scenes] of visionary inchantment would never have an end."

Things have changed quite a bit in the 200-plus years since that legendary expedition of 59 people and one dog journeyed from Illinois to the Pacific Ocean and back. However, much of the "inchantment" is still intact. You can retrace the westward path by following a part or all of the 3,700-mile Lewis and Clark National Historic Trail.

Although the only physical evidence of the journey is found near Billings, Mont. - in July 1805, William Clark carved his name into the soft rock of what he called Pompeys Tower (now preserved at Pompeys Pillar National Monument) - more than 100 sites are marked along the trail and maintained by a diverse collection of groups, including federal, tribal, state and local agencies, and public and private organizations. A map from the National Park Service can guide in planning a Lewis-and-Clark-like trip, which might involve everything from hiking Idaho's Bitterroot Mountains and rafting the roiling whitewater of the Missouri River in Montana, to canoeing a tranquil stretch in South Dakota, home of the Yankton Sioux.

There is another way, of course: on an air-conditioned motor coach with historian guides and baggage handlers (no canoe portages necessary!). Follow the entire trail, from St. Louis to Astoria, Ore., on a 16-day Lewis & Clark Trail learning vacation hosted by Shebby Lee Tours.

At modern-day dude ranches, you're as likely to perfect your tennis serve as learn lassoing, and as liable to meet up with masseuses and manicurists as cowboys and horses. All this pampering is peachy, if out of place, especially when a long day in the saddle leaves you yearning for some shiatsu.

Dude ranches, these days, fall into as many different categories as spas. Among them: "resort dude ranches," "working dude ranches" and plain old generic "dude ranches." A consortium of dude ranchers will help you to sort all this out and decide which breed of dude ranch &mdash; frills, non-frills or something in between - is best suited to your tastes.

Designated by the U.S. Department of Interior as a "National Native Landmark," Echo Canyon is situated on 1,500 acres and adjacent to 60,000 acres of leased Forest Service land. There are lots of opportunities to ride the resident quarter horses, including cattle gathering, working in the arena, and overnight pack trips.

On the sagebrush plains, you can still see ruts left by covered wagons as they navigated the Oregon Trail. These relics would lose their dusty luster, somehow, if you simply stepped from your shiny Hummer for a quick gander. There is a more authentic way to encounter them: as the pioneers themselves would, in the context of wagon train travel.

You can relive the 150-year-old adventure of traversing the Oregon Trail in covered wagons, minus (mercifully) harrowing attacks, incessant breakdowns, and cacophonous pots and pans.

Wagons A+cross Wyoming averages a peaceful 10 miles per day as it follows the Lander Cut-off of the Oregon Trail across the high-desert country, climbs up and over Witherspoon Pass, and drops to LaBarge Creek before heading back. Wagon-weary guests can opt to walk or ride gentle saddle horses during any part of the four-hour-long travel days.

Wagons West treks along unused roads in the foothills of the Rockies and near the Tetons. The covered wagon trains, complete with chuck wagons, are driven by local ranchers; they're authentic replicas, except for (again, mercifully) foam-padded seats that convert to deluxe bunks.